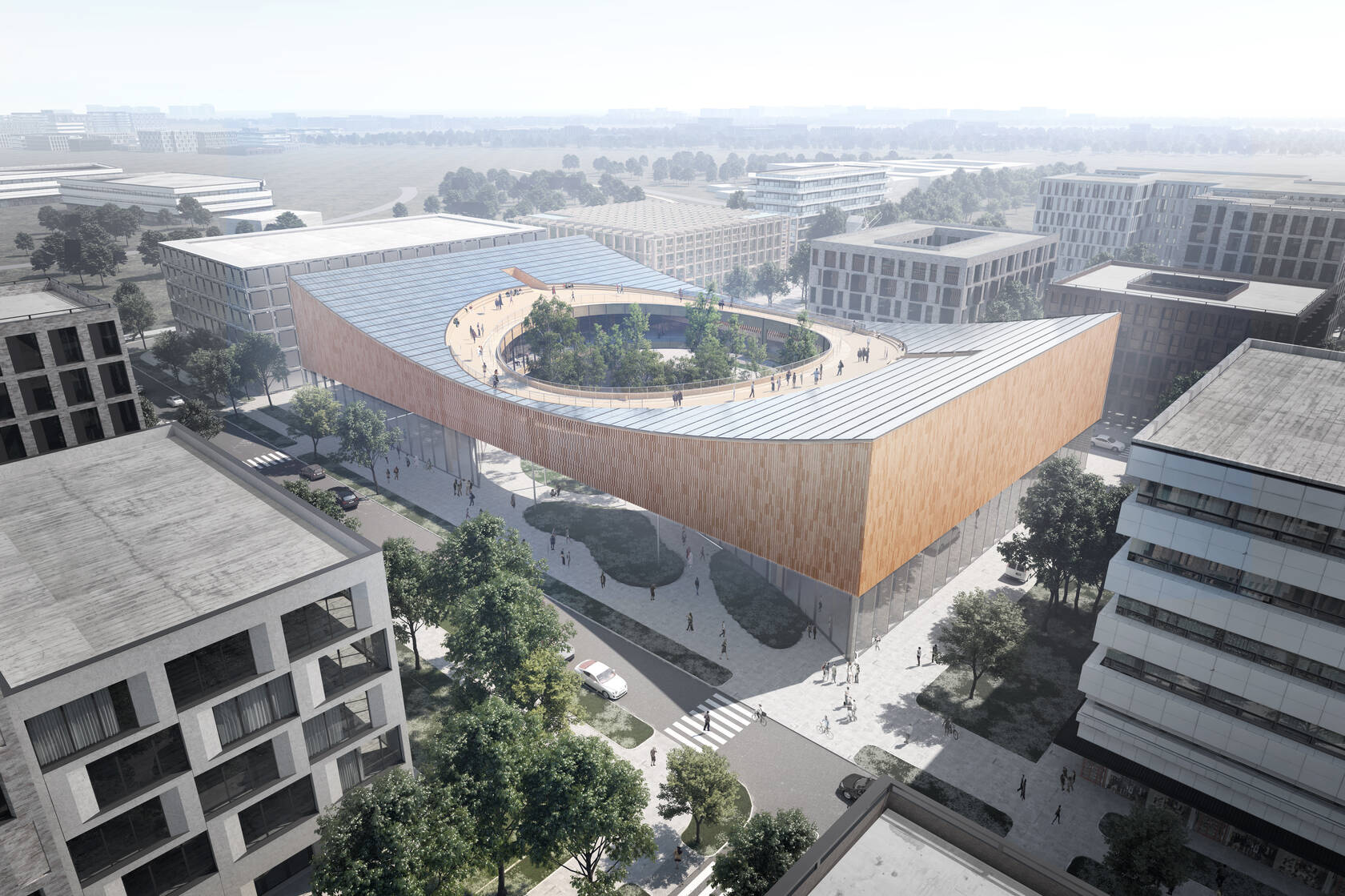 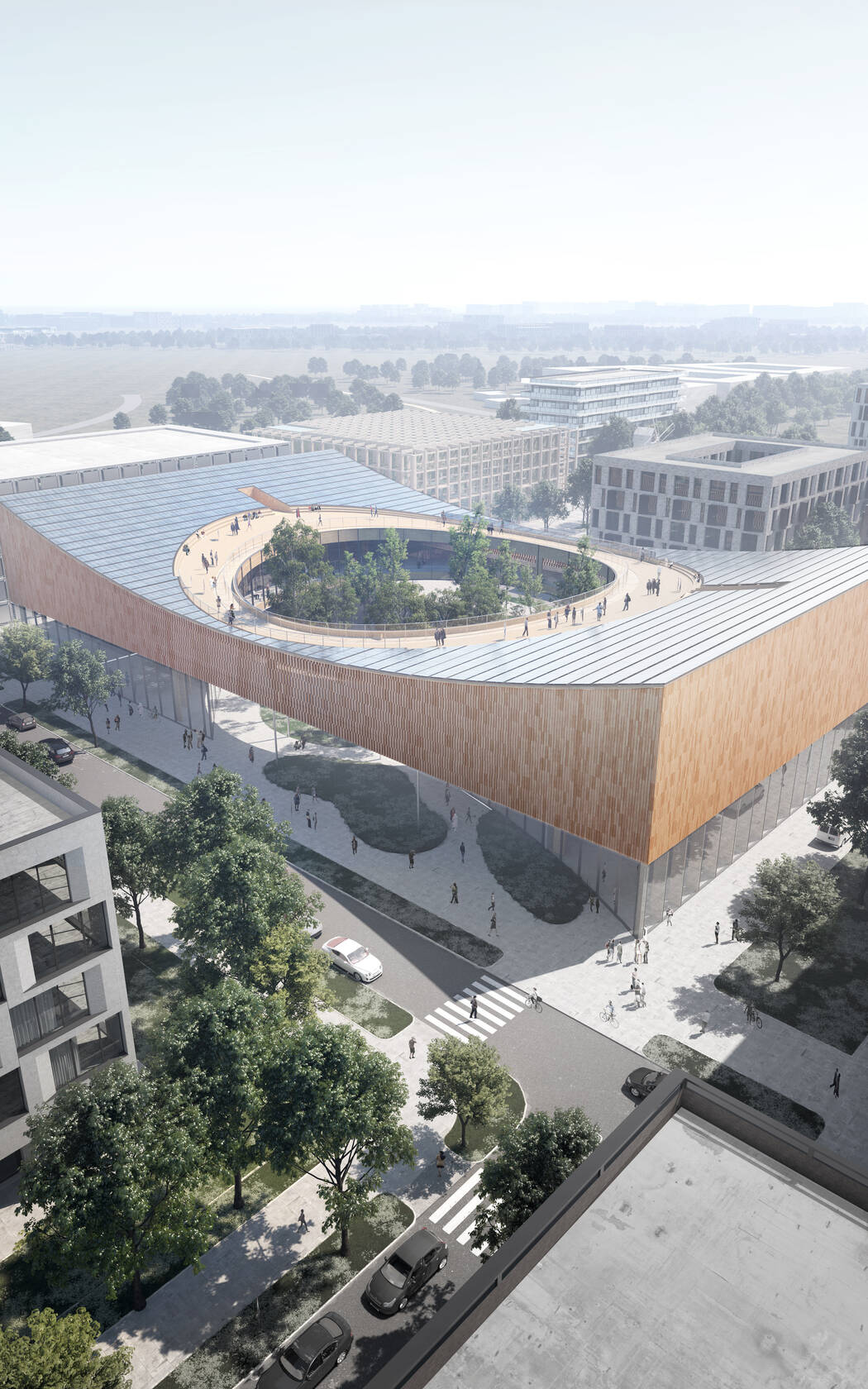 An icon of
sustainability

The science center in Lund, Sweden, combines exhibition hall, gallery, workshops, museum shop, restaurant, offices and an auditorium. The main purpose of the Science Center is to promote general interest in natural science and research in an engaging and playful way and to showcase existing and future technologies supporting sustainable and climate-friendly solutions. The Science Center will be constructed in wood with a roof covered entirely in solar cells, which generate enough electricity to cover the museum’s needs. Organized around a green circular science park, the Science Center both explores and showcases the interconnected dependencies between inside and outside – between building and nature. 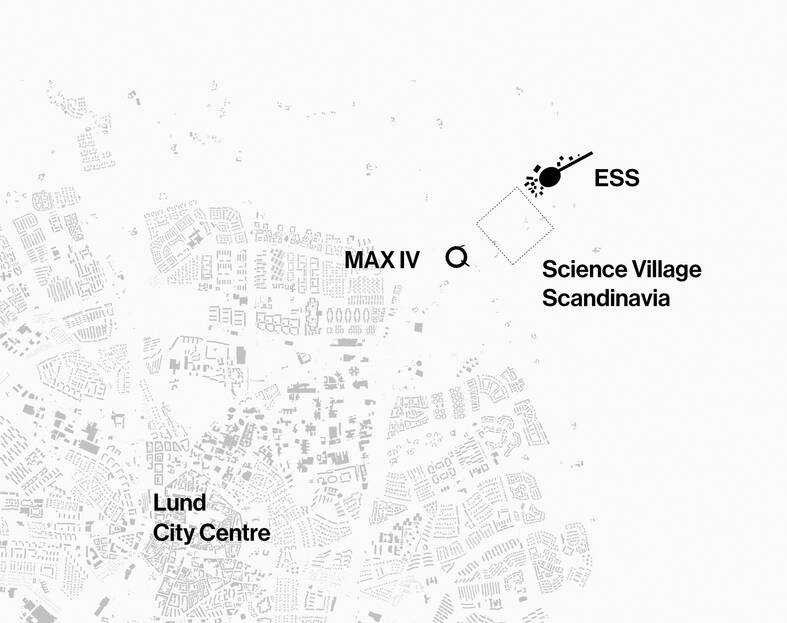 The Science Center is located in Science Village Scandinavia, where the plan is to build a dynamic, creative and sustainable city district, intended for use by businesses, research and educational facilities in the field of materials research and innovation. University and university college campuses, guest accommodation, research institutes, services, gyms, restaurants and cafés will also be part of the Science Village.

The museum is uniquely situated in the middle of the new urban district Science Village Scandinavia between the high-tech institutions MAX IV and ESS, which are currently under construction and will be the world’s most powerful and advanced research facilities within neutron and X-ray research.

Making natural
science accessible
to all 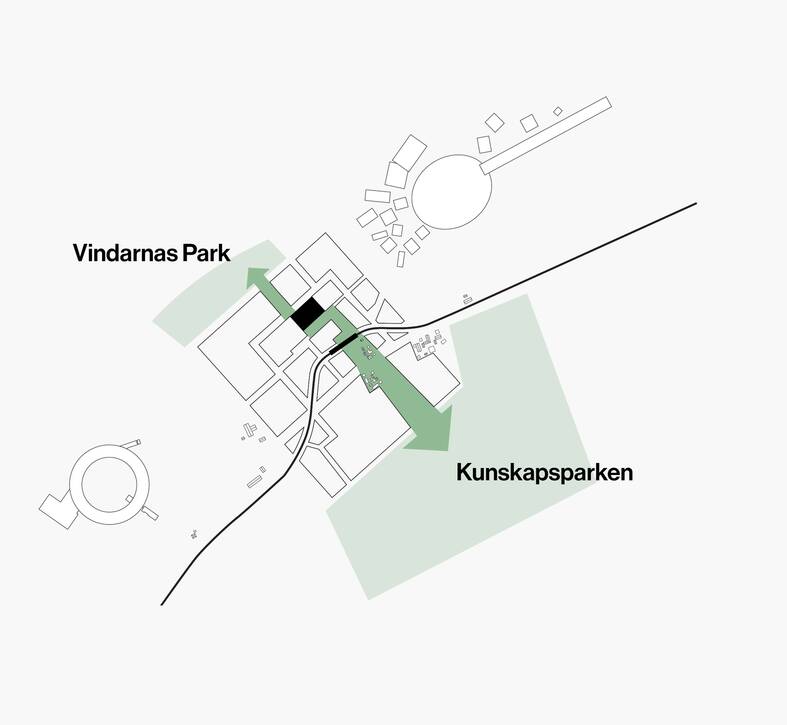 The Science Center is located at the very heart of Science Village Scandinavia along a central green axis connecting parks to the north and the south. 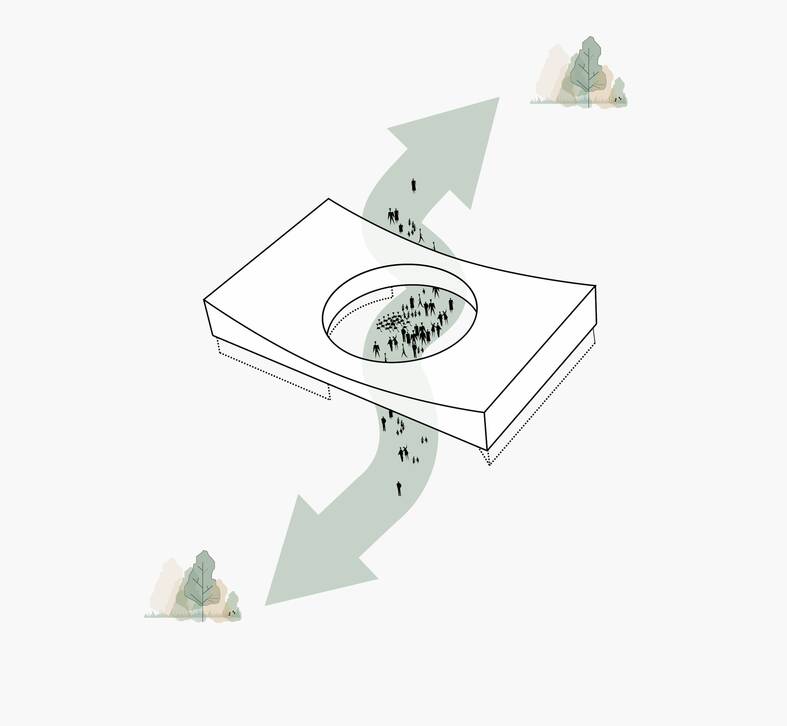 Placing the planned green connection at the center of the museum invites the public inside.

All science is rooted in understanding nature. At the Science Center, nature has a central place in the middle of the building in form of a public science park, where natural science can be experienced and showcased in a scale of 1:1. Placing the planned green connection at the center of the museum invites the public inside the building and helps dissolve the boundary between inside and outside. 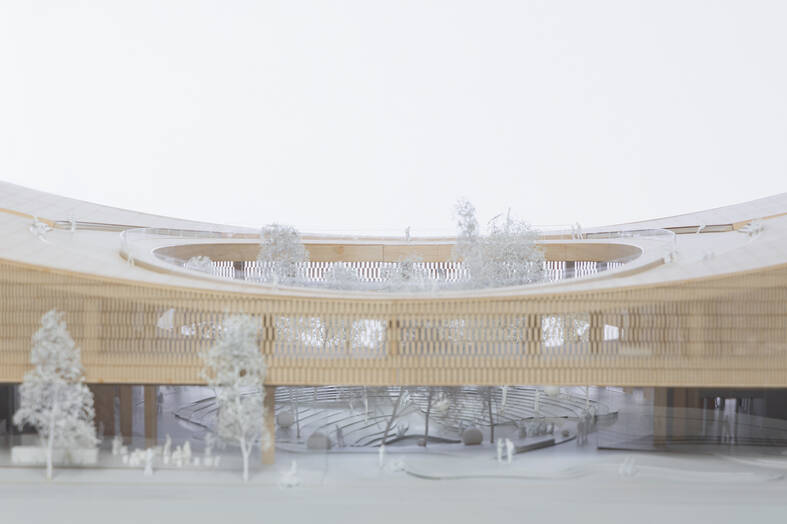 Ambitions for the design of the museum have been sky-high, and we feel that we have succeeded in designing a unique and inviting building, whose open atrium and concave roof lend it a dramatic and elegant profile that stands out and offers novel and innovative ways of using a museum 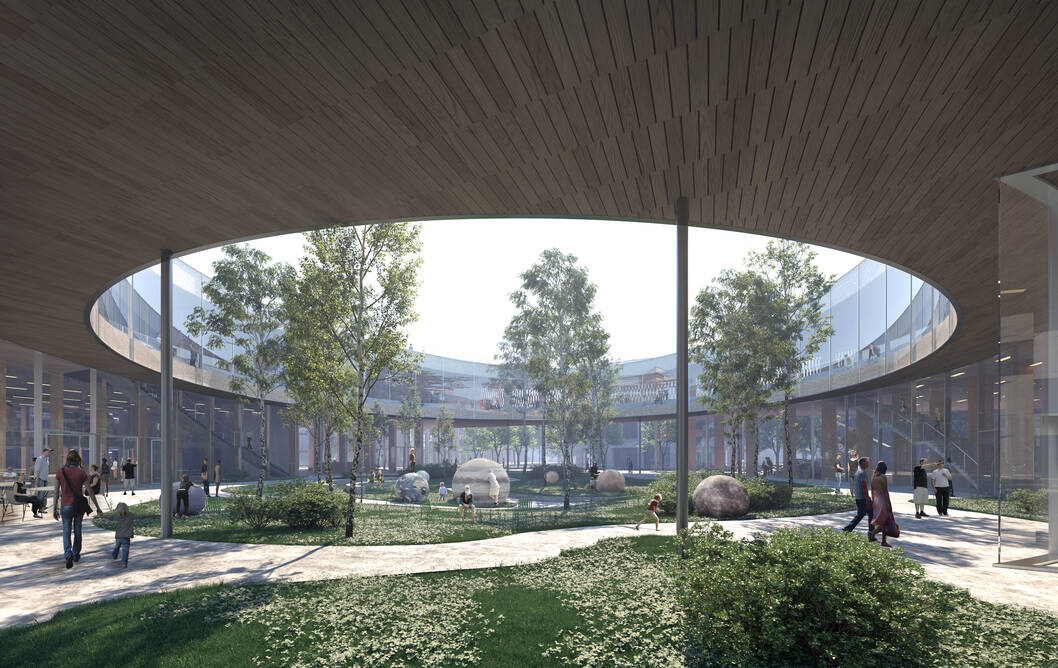 The well-defined circular atrium is an attraction in its own right. The green urban space acts as a corridor for flora and fauna, boosting biodiversity, and the gently sloping terrain further acts as a water reservoir and an overflow canal in case of extreme rainfall. 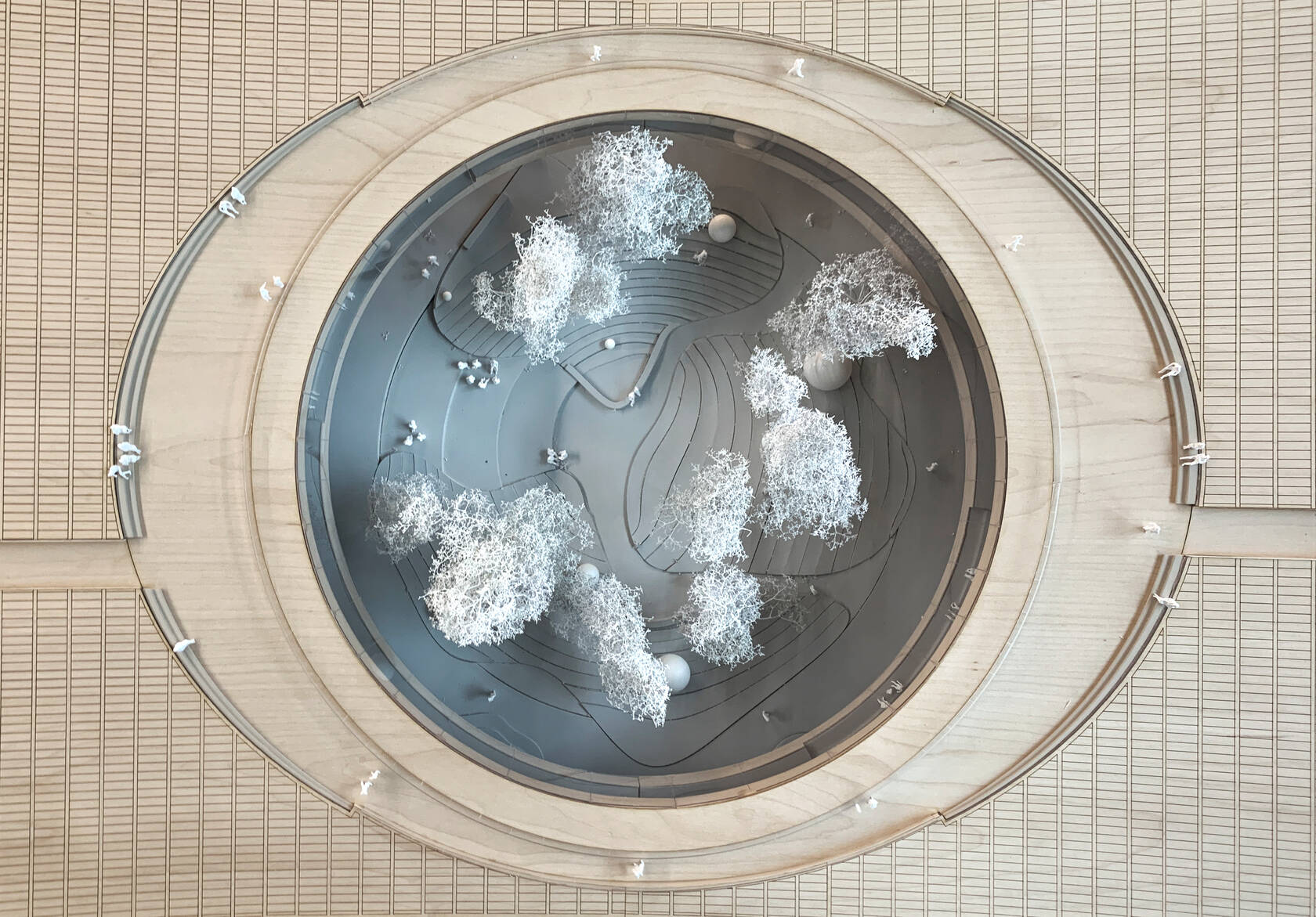 All public functions are placed on the building’s ground floor to promote an active and open atmosphere.

The design creates visual contact between inside and outside and extends the exhibition into the public space at the center of the building. 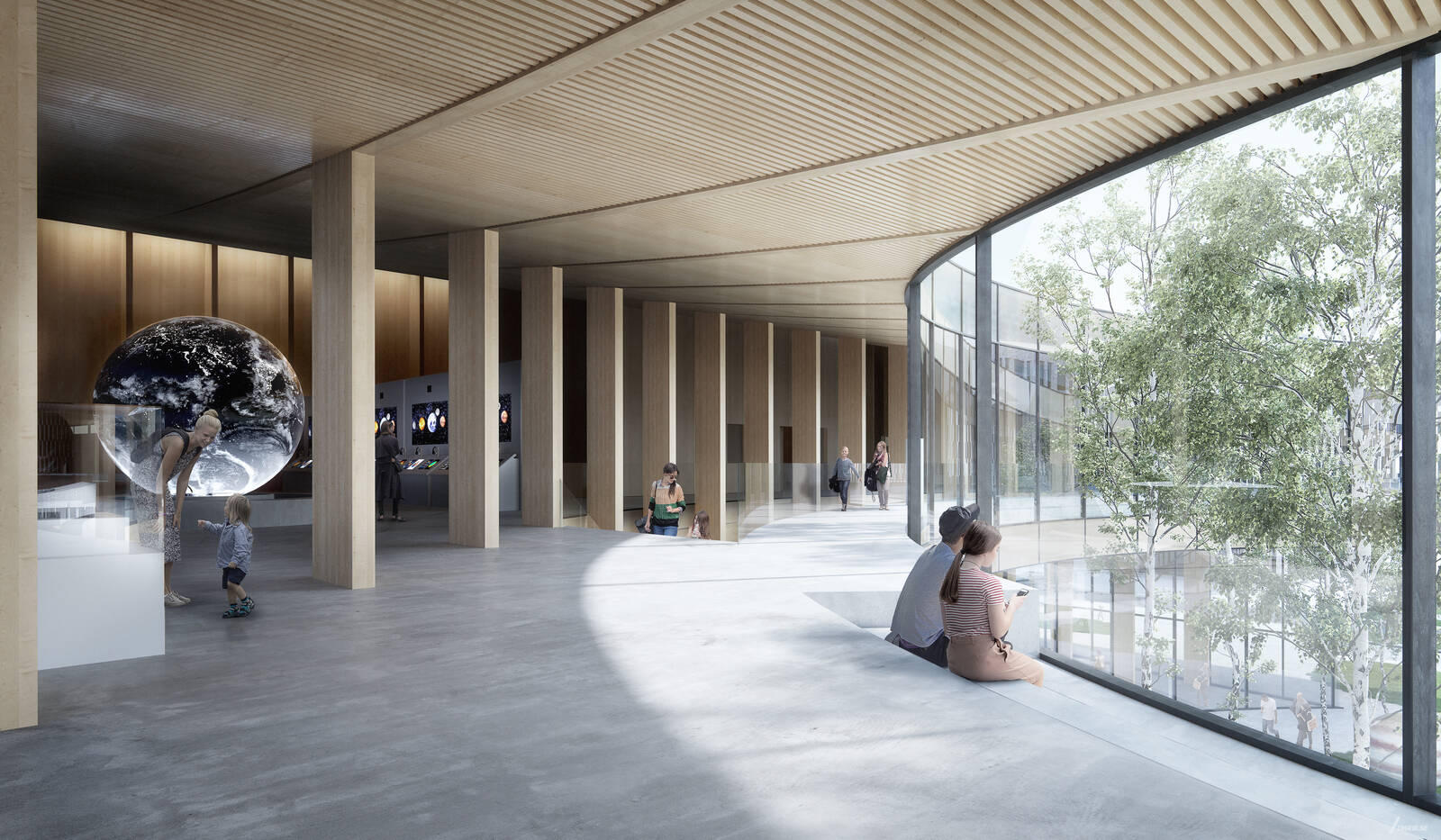 The curved roof is covered by a 1,600-m² energy park producing up to 1.6 million kWh a year: Enough to cover the building’s energy use and keep it CO2 neutral. The roof also serves as a rooftop patio and viewing platform. 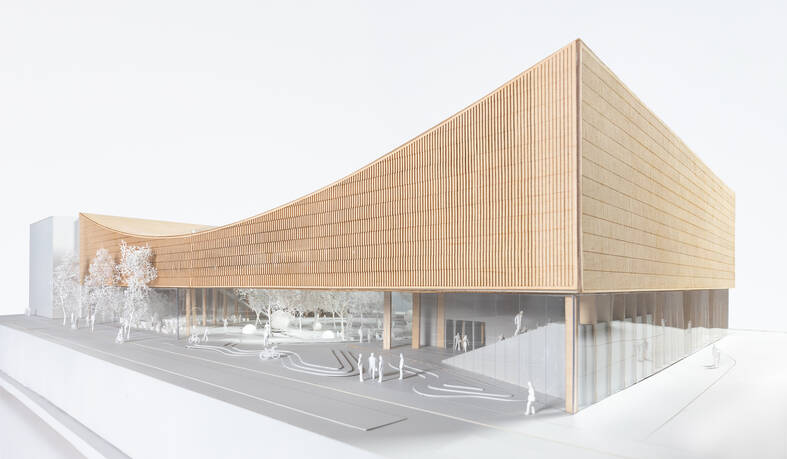 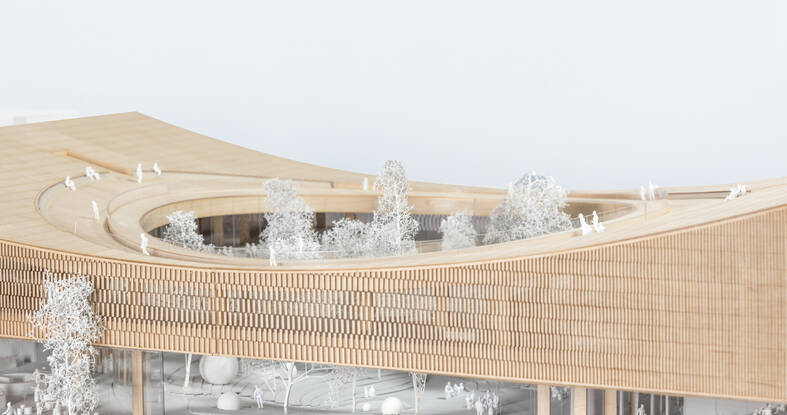 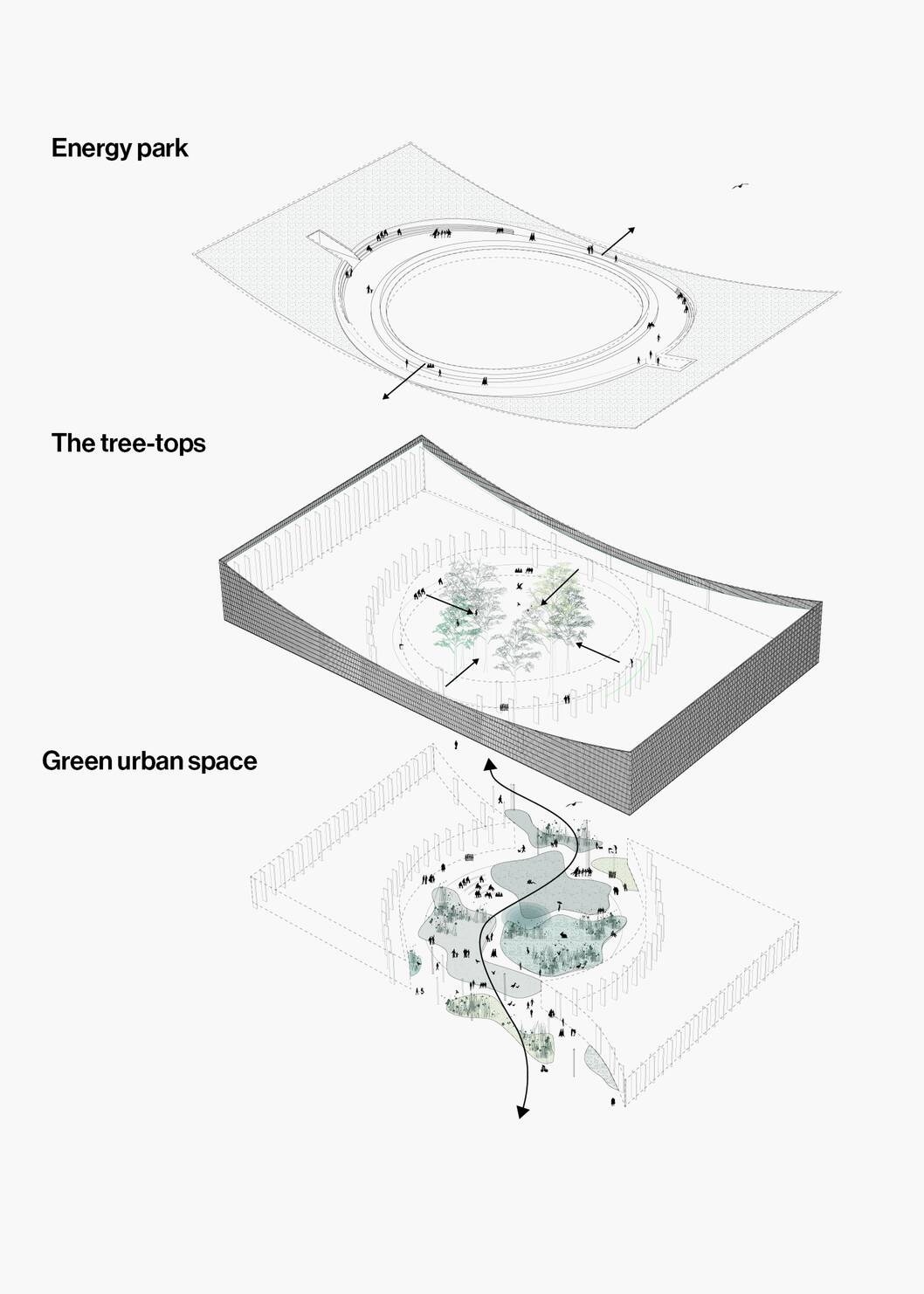 The landscape is present and visible throughout the building. 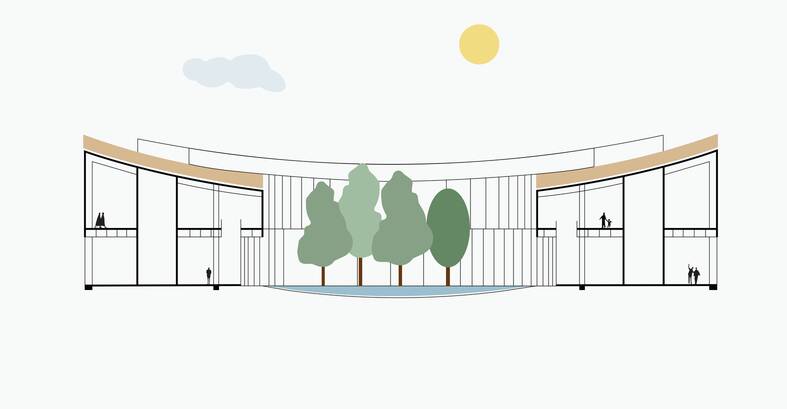 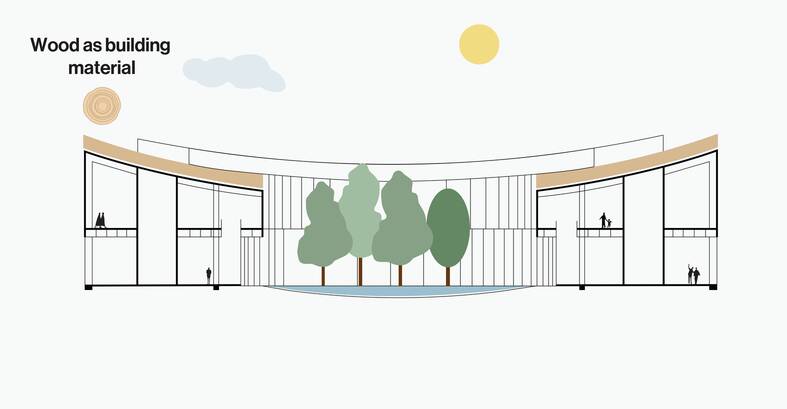 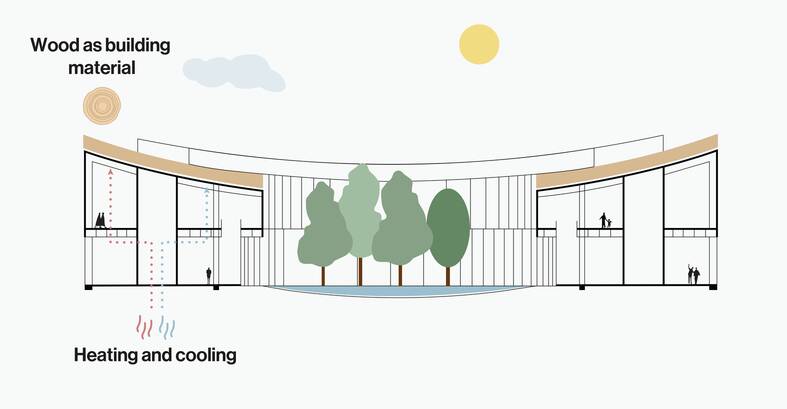 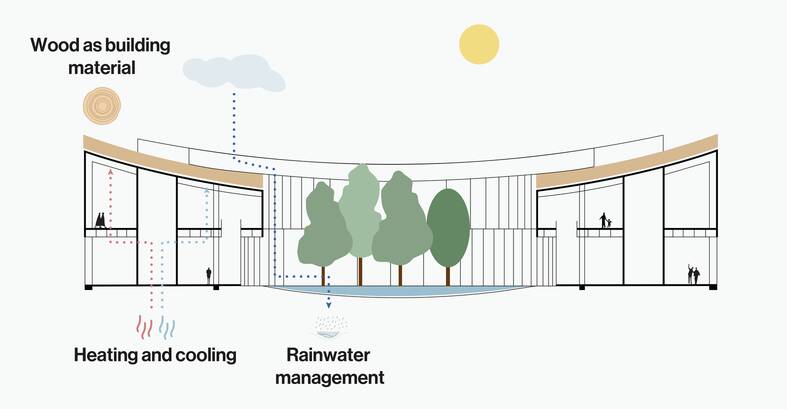 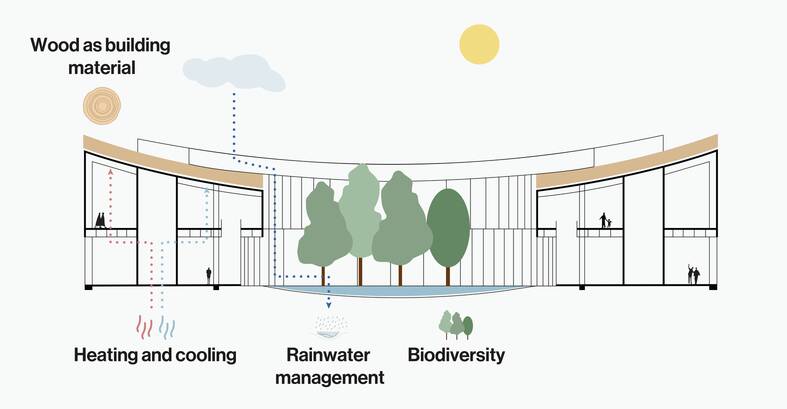 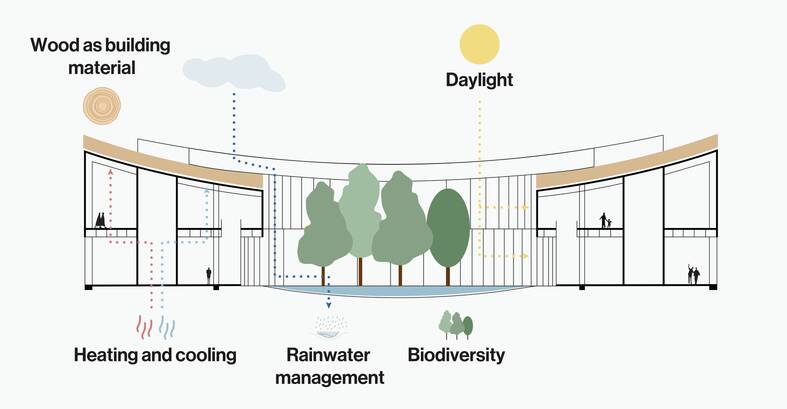 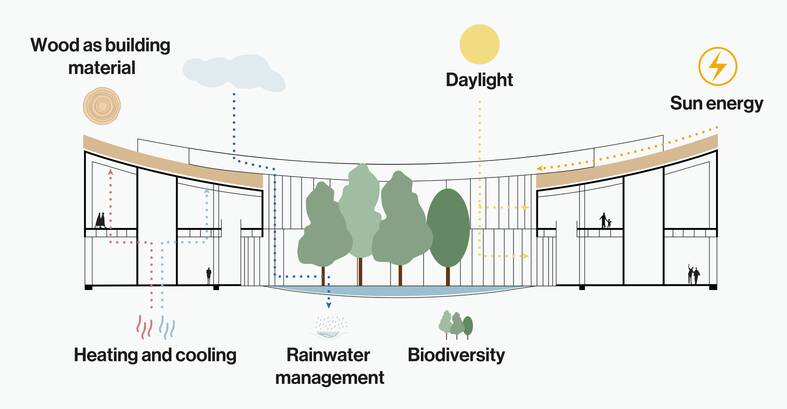 The ground floor is organized around a central public science park. All public and outward-facing functions such as the entrance, café, workshops, auditorium and so forth are located on the ground floor. 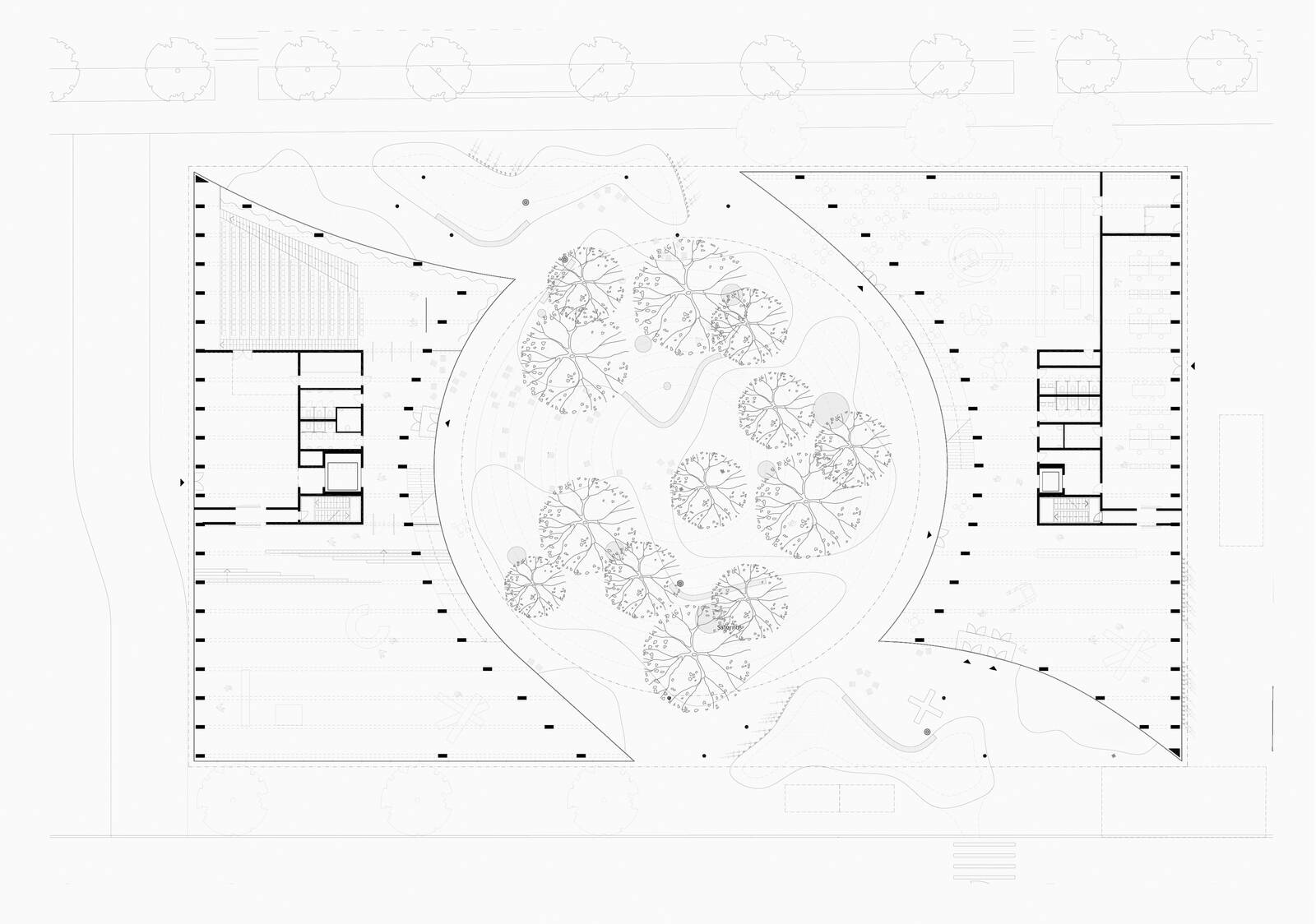 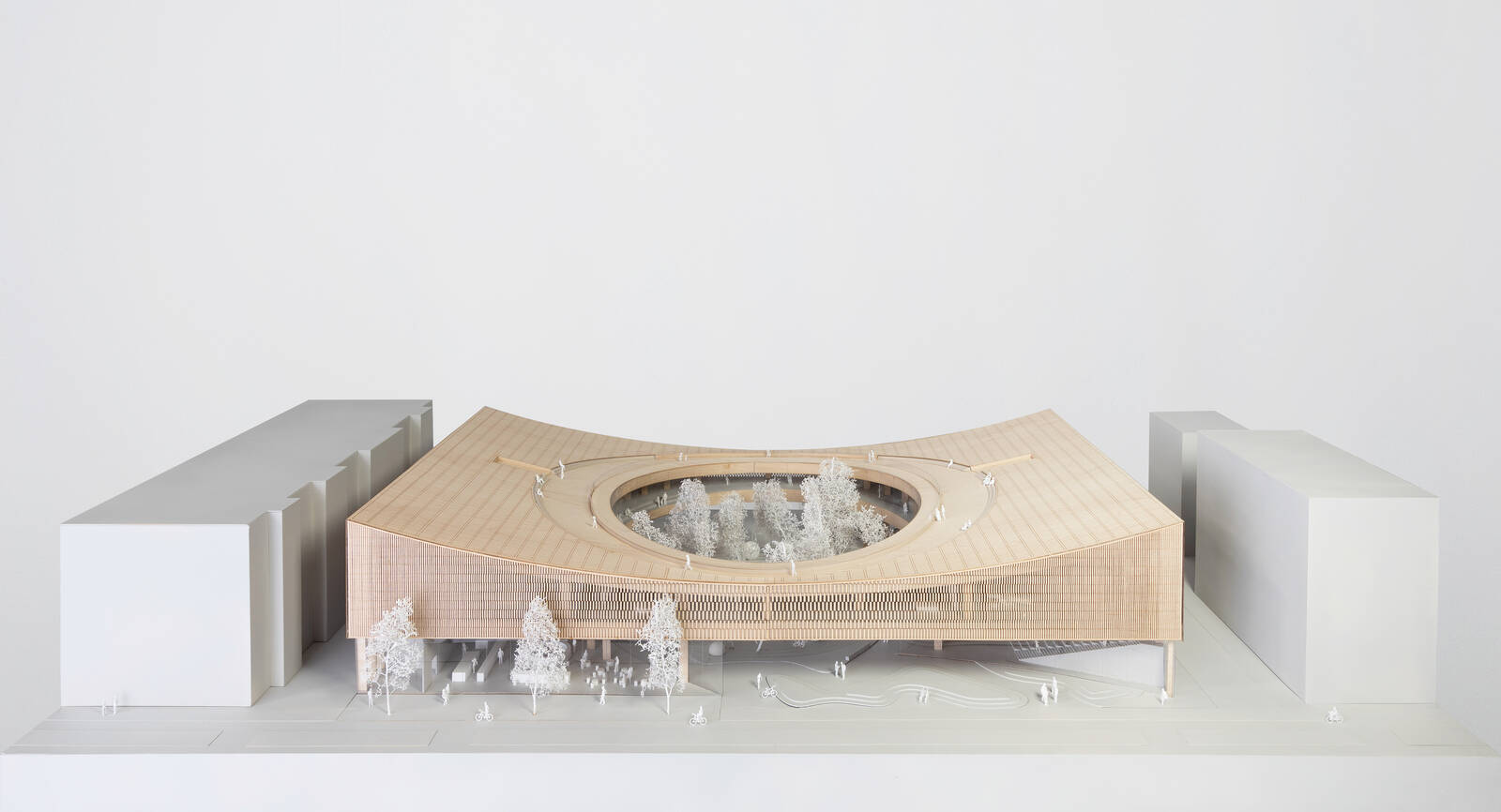 Timber not only absorbs and stores CO₂ when produced, making it one of the only building materials with a negative carbon footprint. It also has a proven list of other positive performative abilities when measured on its impact on construction time, reuse, indoor climate and many other aspects. 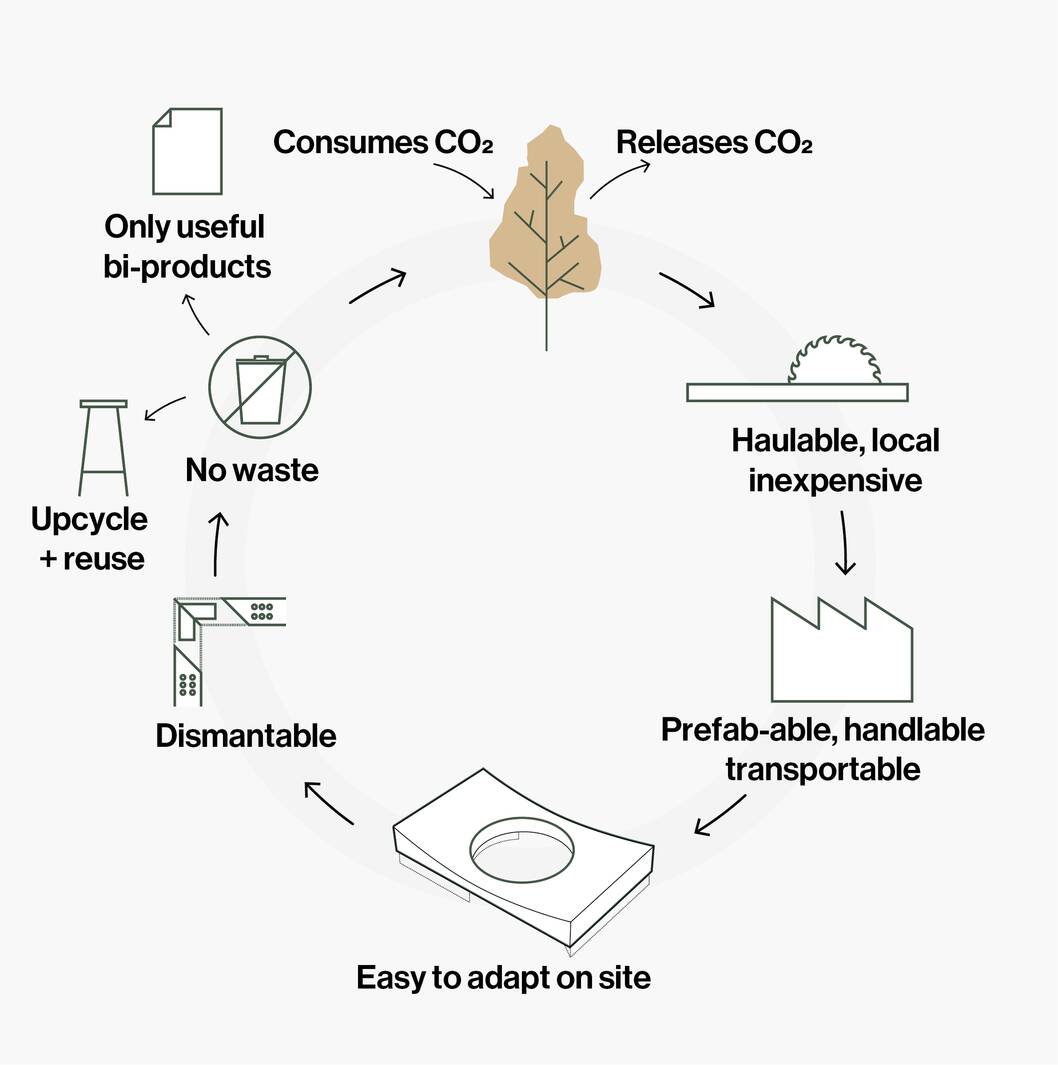 Timber is in its own right a performative building material that absorbs and stores CO₂ as it grows. Today, wood processing, including milling, prefabrication and assembly, is among the most technologically advanced processes in the industry.

The Science Center is constructed entirely of cross-laminated timber (CLT) walls, decks, beams and columns. Using wood for the loadbearing structures, interior and façades reduces the building’s carbon footprint by 80% compared to a building in concrete and steel. 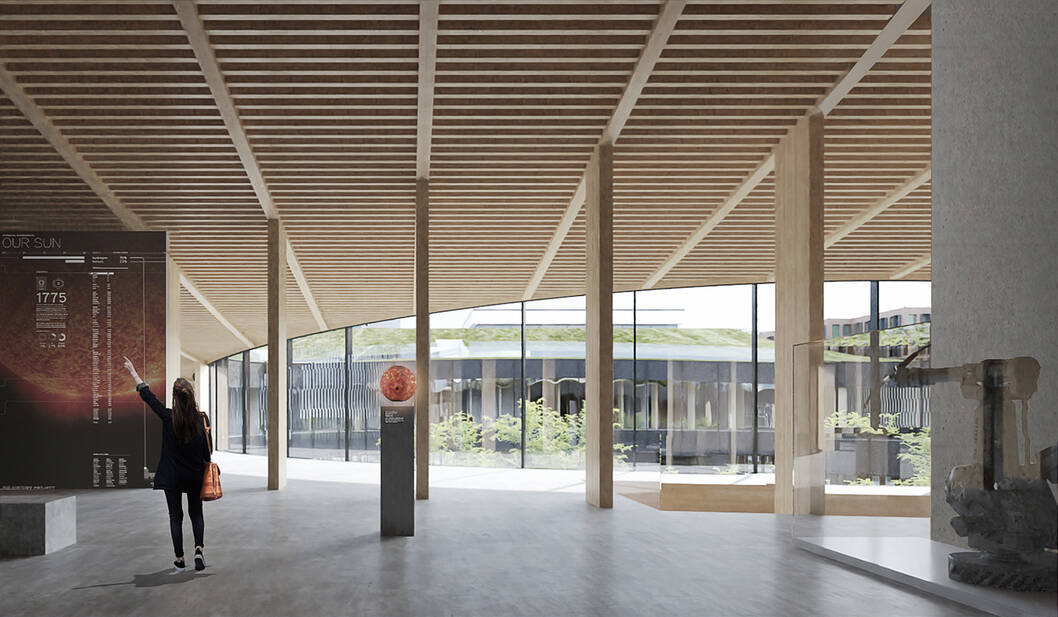 The wooden structure will be visible throughout the building, creating a warm atmosphere and tactile quality. 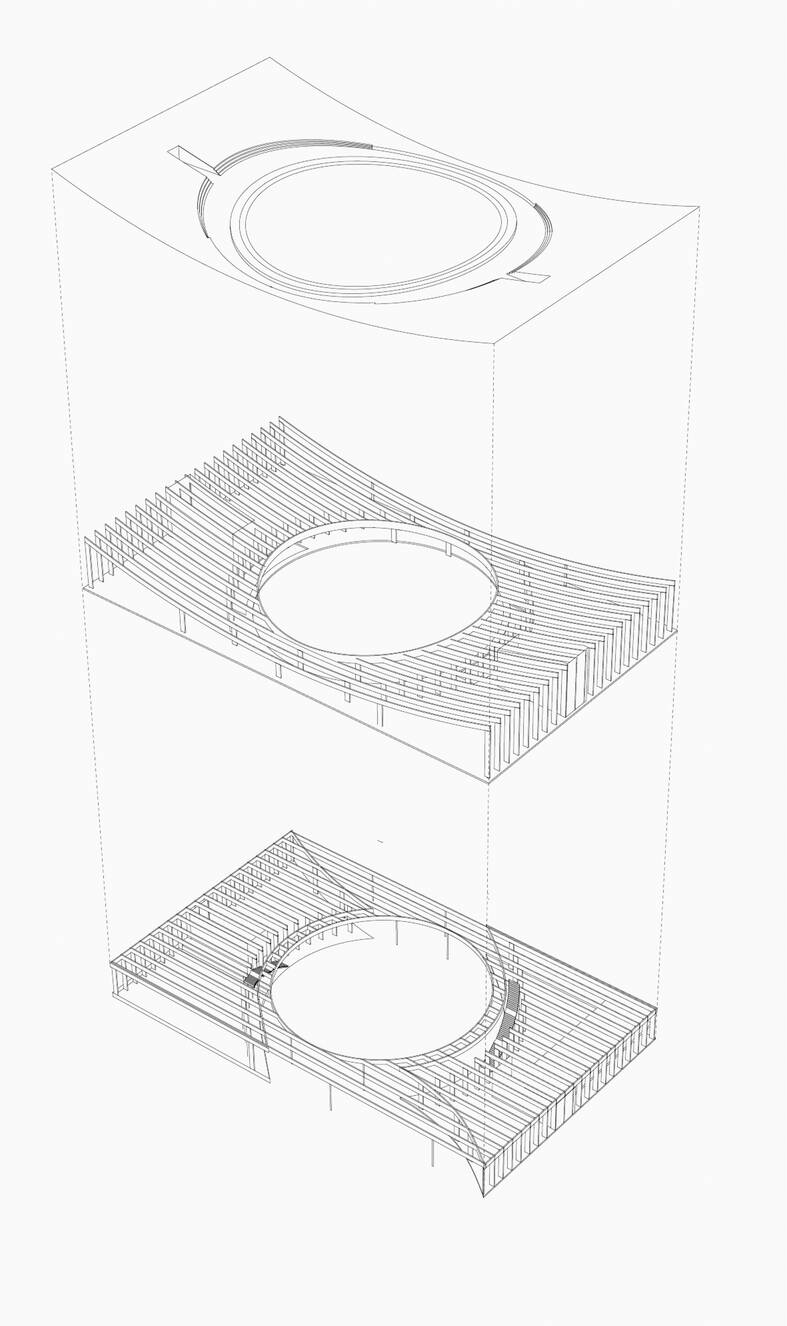 The façades will primarily be made of heat-treated wooden panels. The wooden façade slats give the building a translucent character, conveying the indoor activities to the surrounding urban spaces with a warm glow.

With its unique location, the Science Center has the potential to become a meeting place for visitors to the exhibitions and for those who work and spend time in the area. 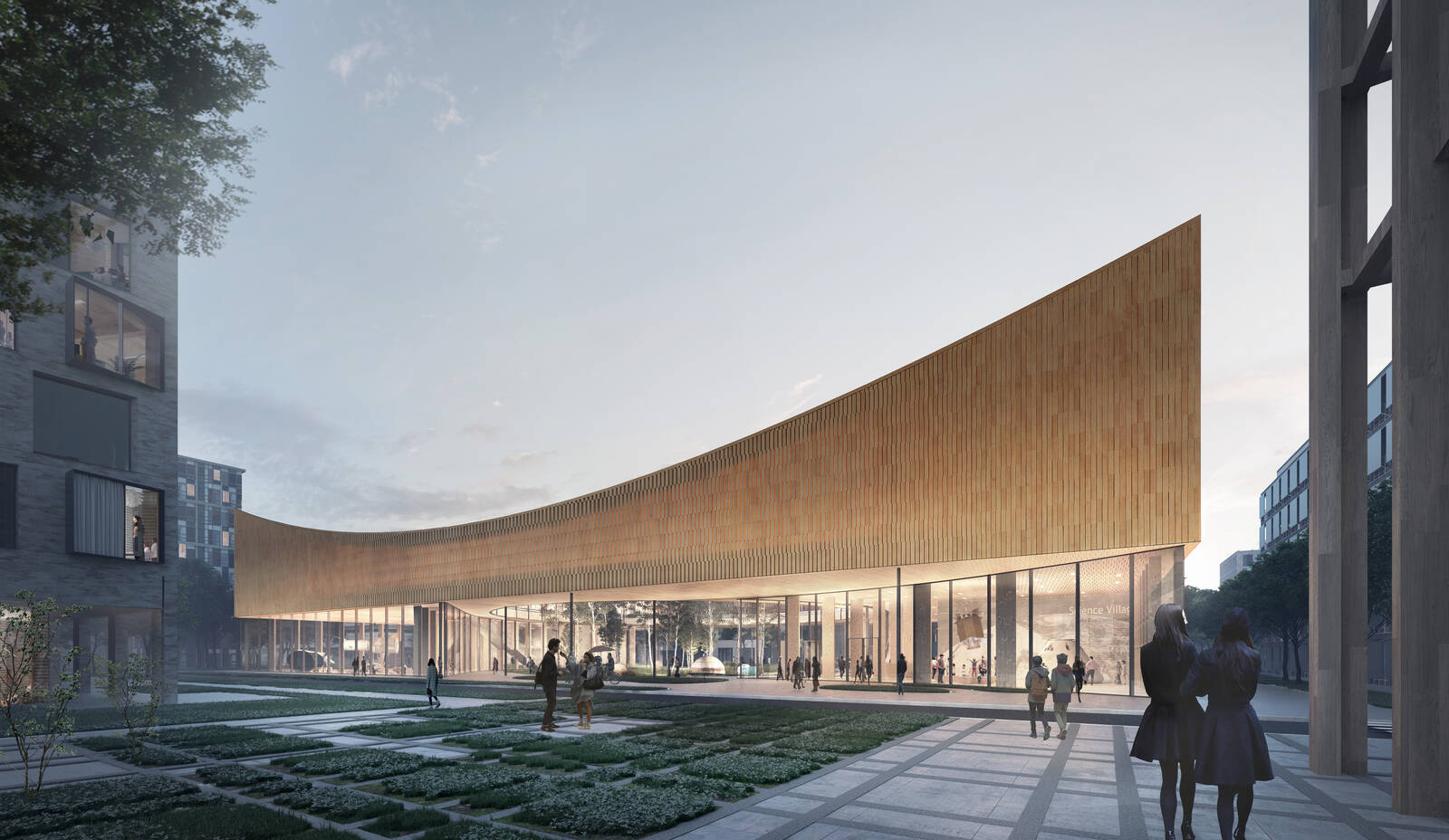 The central courtyard is designed as an open, inviting and flexible urban space, where a vast variety of different activities and functions can take place. In this way, the exhibitions will become visible and accessible, also to those who do not buy a ticket to the museum. 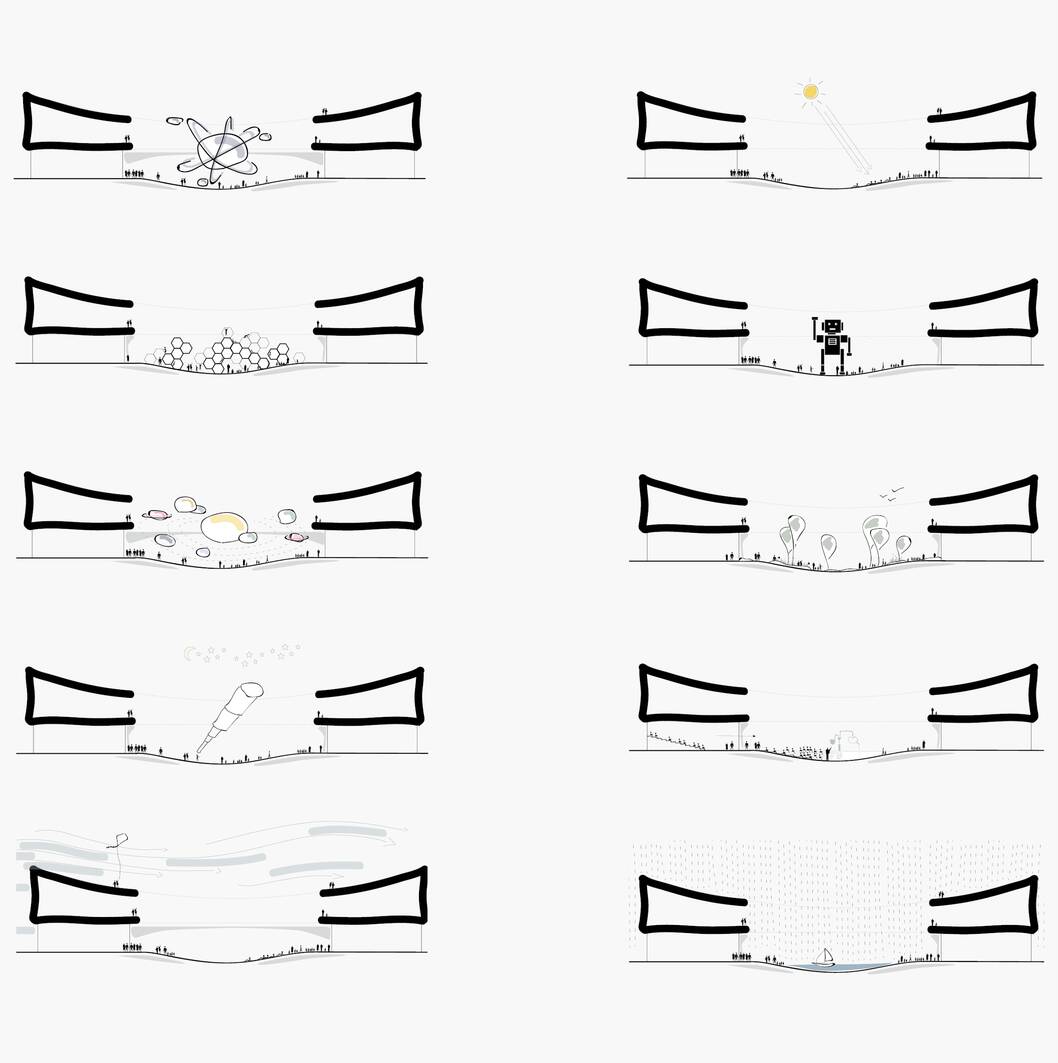 The large, round atrium will be an open, inviting and flexible urban space, where a vast variety of different activities and functions can take place. In this way, the exhibitions will become visible and accessible for everyone – even before entering the museum.

The Science Center's ground floor is designed to be as transparent as possible, while the façade of the first floor is made from pieces of upcycled wood in a system that creates a gradient towards the middle of the building, allowing for more natural light and views in the circulation spaces and less in the exhibition spaces. 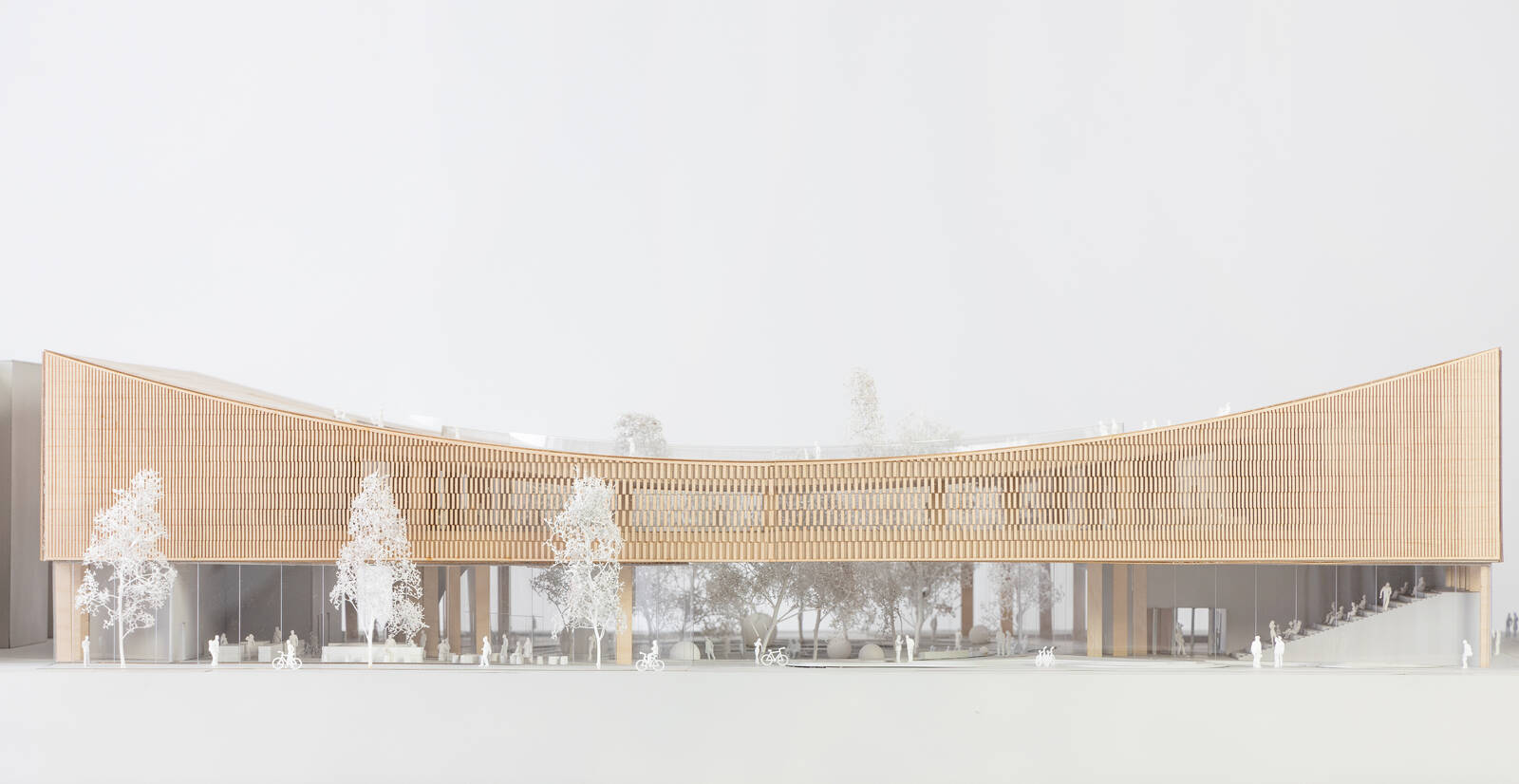